Thank you for using this topic if you find any bugs

hi, I didn't really know where to ask this but
when I added my first photo. It was just black.
In my gallery it was just a black square. What did I do wrong ??
thank you
Haut

5 pictures in the gallery !!
Haut

The data about cameras is poor. Actually, if you don't know more or less Polaroid family, it's not helpful besides picture (which is helpful indeed). So it would be nice to put some links in the description to cemerapedia? wikipedia? elsewhere? and allow usens to contribute: fill in description details, put comments.. that would be awesome database, a start is already good!
Haut

I understand what you mean. I must take some time to fully complete encyclopedia of Polaroid Passion.
Promised, as soon as I have a moment I'll take seriously

Thank you for your message and loyalty

There are several omissions. Some of them might be because of outdated info (newer devices don't appear). For example, now there are more Zink devices and Zink sizes other than PoGo paper and printer. For example, Polaroid Pop camera and paper, Z2300, Socialmatic and Snap (Touch) cameras.

Sorry for double posting but I thought this should be in a separate post rather than editing the last one so it won't be overlooked.

Hi, I haven't been able to post photos for months now because every time I try I get this error.
I tried with different browsers, but the result does not change. 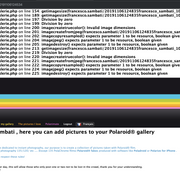 Hi Francesco,
you should check the size of the Polas you desire to post in the gallery. Otherwise, you could try to do as usual but on the French site.